It sounds like the name of an unassuming clerical officer from Stevenage, or some other provincial outpost on these islands. Stanley Booth. But, it’s a name that anyone interested in writing that is concerned with music and musicians as its subjects – rock’n’roll, R’n’B, blues – should know. But, you know, I don’t think Stanley is well known at all. So, why is he not as revered as Greil Marcus or Nick Kent? Um, I don’t know …

When I was looking at the clip of the Rolling Stones (which I posted below) from the early 70s, I couldn’t help but think of Stanley Booth’s great book, The True Adventures of the Rolling Stones (that’s the jacket of the original Heinemman edition, 1985, pictured below). Far from being some kind of clerical officer, the inside flap of the book notes that Booth had previously worked as ‘a karate teacher, a state welfare worker, a Pinkerton operative, and a writing teacher.’ A Pinkerton operative?  I recall now buying it back in 1985 for something like 25p, from one of those Bargain Books shops that always seemed to be located near bus and train stations (remaindered stock, on the way to the skip, for a transient population on the road to nowhere, etc). 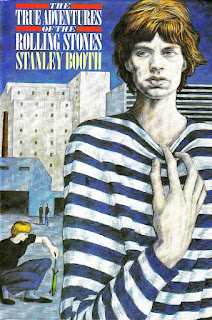 It’s a tremedously evocative portrait of the end of the 1960s, whose demise has been closely associated with the Rolling Stones’ infamous December 1969 performance at the Altamont Speedway in California, which was famously captured in the Maysles Brothers film, Gimme Shelter. One of the most memorable chapters in the book recounts Stanley’s trip to Cheltenham to interview the parents of Brian Jones, not long after the Rolling Stones’ founder member had died in 1969.

And there they were: two respectable middle class people, probably born in the distant 1910s, 1920s, baffled by how this thing, rock’n’roll, could have changed their polite son from an aspiring draughtsman into the embodiment of rock’n’roll decadence. Cheltenham, Gloucestershire, for Stanley – who was from the swamp country of Waycross, Georgia – was a foreign land. So, of course, he records the kind of details that only a traveller would latch onto – the fact that the only soft drink his hotel serves is orange squash seems strangely characteristic of how little England, beyond the metropolitan centres, had changed in the previous 20 or 30 years. Cheltenham reminded him, he said, of Macon, Georgia, where he went to school ‘wearing an army uniform, carrying a rifle.’ This was a book published some fifteen years after the events it recounts took place. Stanley Booth was there at Altamont, and spent the year on the road with the Stones. This was still an era when rock musicians allowed writers and reporters to get close to them. That proximity to his subject shows in the way the story of that year is told.

It’s no surprise that the cover of the second edition of the book, published by Chicago Review Press in 2000, has the testimony of Keith Richards emblazoned across the front: Stanley Booth’s book is the only one I can read and say, ‘Yeah, that’s how it was’. But, it’s worth saying that this is no censored, ‘official’, biography. The portrait it paints is often not flattering. Of first meeting Keith Richards, for instance, Stanley describes seeing before him, an ‘advertisment for dangerous carefree death – black ragged hair, dead green skin, a cougar tooth hanging from his right earlobe, his lips snarled back from the marijuana cigarette between his rotting fangs’.

And, in the light of all that has been said about Altamont – that it represents the end of sixties optimism, etc., etc. – what more could be said about it, especially by a first-hand witness who had stood at the side of the stage as the Stones performed, and Meredith Hunter was murdered by the Hells Angels? Fifteen years – and in the meantime everyone else (i.e., those who weren’t there) has had their go at telling the story. But you know from the opening paragraph of True Adventures, which captures Stanley riding with the band in their car, on the way to Altamont Speedway, that this is better than the rest: “It is late. All the little snakes are asleep. The world is black outside the car windows, just the dusty clay road in the headlights. Far from the city, past the last crossroads (where they used to bury suicides in England, with wooden stakes driven through their hearts), we are looking for a strange Californian hillside where we may see him, may even dance with him in his torn, bloody skins, come and play.”

That last sentence undoubtedly reflects the publisher’s preferred title (changed at the last minute), ‘Dance with the Devil’, if not how apt the Stones’ own ‘Sympathy for the Devil’ was in soundtracking that year of 1969. My guess would be that Stanley Booth’s book is the one that fully fills in the background and captures the era and its mores – i.e, we read more than just the events leading up to that unfortunate day at Altamont Speedway, and get more of a sense that something really bad could be just around the corner at anytime with the Rolling Stones in those days. 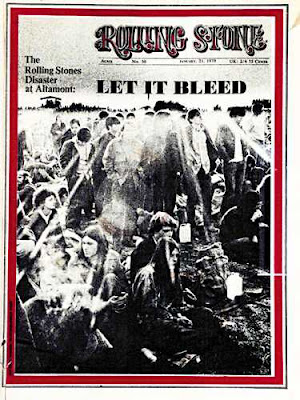 One other enduring image of Altamont for me was provided by the sight of Jerry Garcia of The Grateful Dead. In the film Gimme Shelter, he is seen to arrive at the site late in the day and we first glimpse him in the company of Santana’s drummer, Micheal Shrieve, who is attempting to relay how disastrous things had turned out. As Shrieve explains to Garcia, and the Grateful Dead’s Phil Lesh, that the Hells Angels (who they had recommeded as security for the concert) had been beating up members of the audience and even musicians onstage, Garcia just kind of stood there dressed in a cape – stoned – saying, ‘Uh, bummer, man’. I found this very short interview with Stanley Booth, for those who want to read more.

A longer and more informative piece than this can be found here. Below is a clip from the Gimme Shelter film, with the Stones on the road in the States in 1969. In this scene, they have just checked into a motel, and we see them in a room listening to a demo of the song, ‘Brown Sugar’. Stanley Booth is the guy standing up with Mick and Keith, wearing the blue denim shirt. If you like rock’n’roll, or just like writing no matter what the subject is – or writing that is about rock’n’roll, read Stanley Booth’s The True Adventures of the Rolling Stones.You will not be disappointed.