So, continuing a day of updates after a prolonged period of absence / internet unavailabilty (and when I have a bit of time on my hands), I would like to bring you a fascinating interview that I just listened to yesterday about the affairs of the post-Beatles Beatles, with one Peter Doggett, author of the excellent You Never Give Me Your Money (2009), which is so good that it has at least three editions – all in different jackets.

Here is the link (if you are reading on mobile / tablet, the embedded audio may not display – if so, please use the MP3 link below):

The interviewers are Mark Ellen and David Hepworth, two entertaining pranksters, formerly of the BBC’s (Old Grey) Whistle Test, and now editors of one of the best current magazines about music, The Word. There are too many fascinating and funny anecdotes in the Doggett interview to mention here, but the story of the photograph of the Abbey Road album cover – is fascinating. 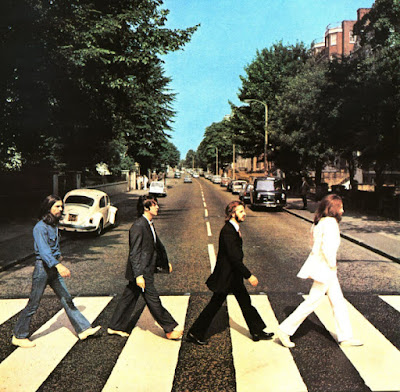 The photographer took about 3-4 exposures, and the one that appeared on the album cover was the only one where they are walking in step with each other. They pretty much couldn’t stand to be around each other by this time, and were not about to keep trooping across that road all day – so, in a few minutes, the shot was taken. But, what’s more, it was seemingly the LAST time the four of them were ever together in one place – August 8th, 1969. As a correspondent on Wikipedia has added, “at around 11:30 that morning, photographer Iain Macmillan was given only ten minutes to take the photo whilst he stood on a step-ladder and a policeman held up the traffic …”

The Beatles in Hamburg